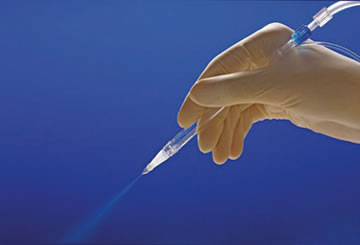 Aims: The aim of this presentation is to introduce a novel, supersonic delivery system for the delivery of actives into the skin.

Methods: This presentation is a collection of the clinical work to date for this novel delivery system, showing how the device works to the various actives which are utilizes to improve the skin.

Today, skin rejuvenation procedures are among the most popular treatments for those in search of a youthful appearance. Sun and age-related imperfections such as wrinkles and pigmented lesions as well as scars and acne are all treated with a revolutionary, multifunctional, skin rejuvenation technology based on jet aviation engineering. A two phase supersonic jet that consists of microdroplets of saline solution and air is used to improve skin appearance in a non-invasive, short, painless treatment. The aesthetic market continues to expand, apparently with no end in sight. Over the last few years, skin rejuvenation procedures have become doctors’ favorite physician performed treatments, meeting patients’ needs in the rapidly expanding aesthetic, skin care market.

The new revolutionary technology used by the JetPeel system is recommended for a variety of skin conditions and enhances skin appearance in a non-invasive procedure. The system uses a specially designed handpiece to create a liquid-gas jet which is accelerated to 200m/sec. When the very small fast-moving droplets from the jet stream strike the skin several things happen:

ï The kinetic energy of the droplets exfoliates the outer layer of the epidermis. ï The pressure created by the high-velocity jet stretches the skin at the point of contact, causing micro-canals in the epidermis to broaden as the skin stretches and creating new canals. This process, called “barophoresis”, is the result of pressure variance. It facilitates hydration and cleansing of the treated area and without needles opens access to the skinís inner layers providing deeper penetration and allowing introduction of actives such as meso-therapy vitamins and other solutions. Nutritional elements currently being used include Hyaluronic acid which can reaches the ski’s natural connective tissue; vitamin C, which improves the ability of skin cells to even out pigments; and vitamin a, B and E which are important ingredients for the proper functioning of cells.

Due to its multi-purpose nature and painless treatment the JetPeel system is recommended for:

New medical-aesthetic techniques are designed to achieve several effects with a single treatment of short duration, with no downtime for the patient. The new JetPeelô3 answers this need as part of an anti-aging skincare program. The 200 meter per second micro-flow not only smoothes the skin, but also improves the various skin conditions that affect the patient’s appearance in a short non-invasive procedure. JetPeel can be used on any skin surface of the body and face, the pilous part of the head, dÈcolletÈ and on the hands and feet.

Combining traditional procedures with JetPeel treatment is most beneficial in facial rejuvenation.

The JetPeel can be used for the trans-dermal delivery of nutrient supplements, mesotherapy products, vitamins and minerals without needles. A typical session lasts about 30-45 minutes for treatment of the full face. Patients feel comfortable and relaxed during the treatment and they appreciate the results. After a single session, the skin texture is improved; the skin looks more radiant and has a more youthful appearance.

Experimental study was conducted by HPBM*. Its report is being presented hereby:

Caffeine was dissolved to 1mg/ml in water and used for JetPeel device treatment instead of water, for the duration of 1 minute. Treated and non-treated skin circles were cut along circle lines and placed in diffusion chambers.

5 cells of Diffusion Chamber System (Harvard) were filled with 3ml PBS at the basolateral side, and adjust to 35°C on heat block for 15-30 minutes.

At transport onset, apical side was loaded with 1mg/ml Caffeine in water

Aliquots were removed at 0.5, 2, 6 and 20 hours fresh PBS replaced the exact removed volume.

Aliquoted samples were analyzed in HPLC according to the procedure described below.

An apparent permeability coefficient (Papp) of Caffeine was calculated from the following equation:

The JetPeel device may facilitate the transport of drugs across skin. To determine if indeed drugs are transported faster with device treatment, we utilized a model hydrophilic drug – Caffeine.

In Caffeine transport experiment, 1mg/ml Caffeine solution replaced the water in the previous treatments. Following treatment, skin samples were stretched in diffusion chambers and Caffeine was loaded at their apical (air) side. Aliquots were removed at several time points from the basolateral (body) side of the diffusion chamber and analyzed for Caffeine concentration with HPLC (Figure 3). Permeability coefficients were subsequently calculated (Table 1).

Caffeine was administered at the apical side of pig skin pieces with the JetPeel device (n=2 for treated and non-treated group). Samples were removed from the basolateral chamber at 0.5, 2, 6, and 20 hours following treatment, and analyzed in HPLC. Typical chromatogram and summery of individual raw data are presented in Appendix 1.

Caffeine concentration in mg/ml with standard deviation is plotted vs. transport time in minutes. Trendline regression is presented adjacent to each graph. 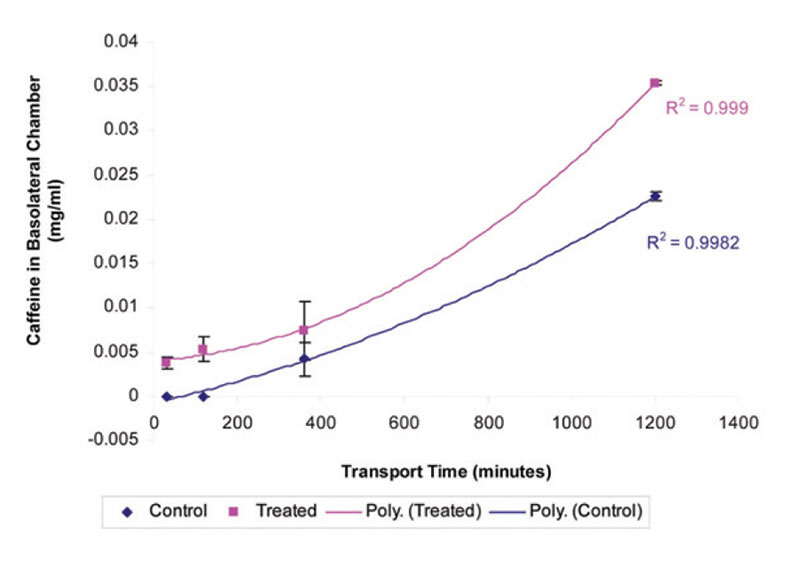 As can be seen in Figure 3, JetPeel treatment resulted in almost immediate increase, as early as 30 minutes, in Caffeine transport to the basolateral chamber. The higher Caffeine could be measured in the non-treatment samples.

These results demonstrate the ability of JetPeel device to cause Caffeine penetration into the skin, followed

by its immediate release at the other side.
Permeability of compounds is usually expressed as the flow of a compound through surface area. Thus, we calculated permeability coefficients (Papp) of Caffeine for each time point (Table 1).

[/fusion_text][fusion_separator style_type=”none” top_margin=”” bottom_margin=”30″ sep_color=”” border_size=”” icon=”” icon_circle=”no” icon_circle_color=”” width=”” alignment=”center” class=”” id=””/][fusion_text]Permeability (Papp) values of the Caffeine-treated skin samples are much higher although the experiment.
Papp values of Caffeine is non-treated skin are well correlated with its values in the literature (above 1×10-5).
An increase in Papp values along transport time with both treated and non-treated skin is observed. This phenomenon usually hints to active transport. We presume that the influence of Caffeine on transporters in the skin bring about this increase1.

In this reported study, JetPeel device treatment pressurized into the skin either oxygen with water, or oxygen with Caffeine.
The signal of oxygen released from skin tissue was not specific to JetPeel treatment probably due to high background signal from the tissue itself.
JetPeel Caffeine treatment resulted in an almost permeation of the compound. Caffeine high concentrations levels were maintained through the experiment. 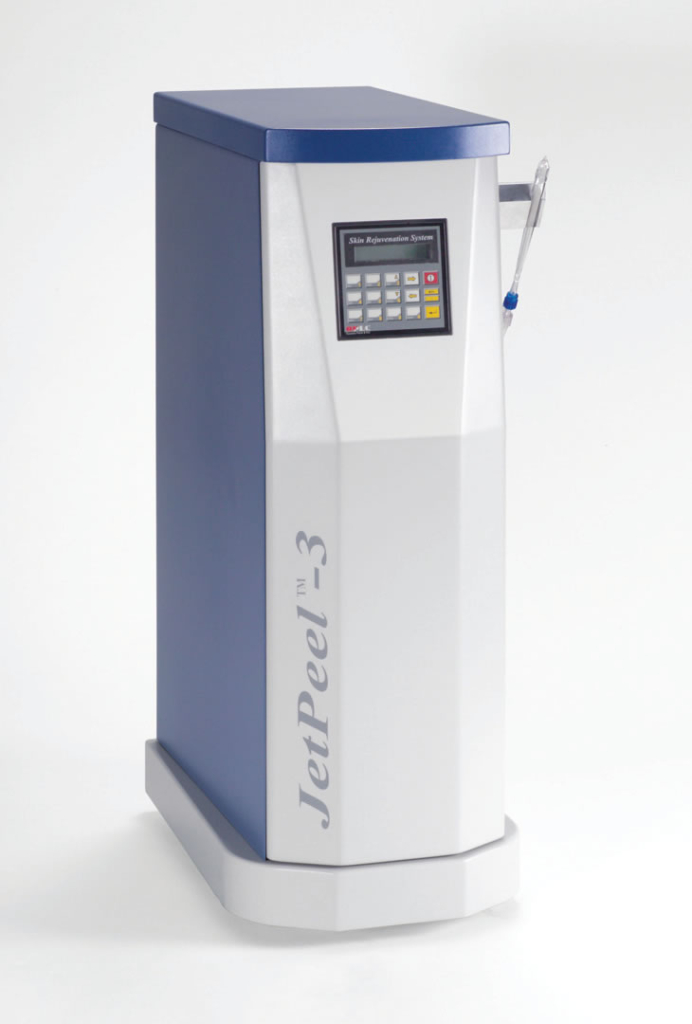 Results: The novel delivery system has shown effectiveness in improving the quality and texture of the skin, of improving acne vulgaris, and in the delivery of other important actives into the skin.

Conclusions: The JetPeel is a new, novel delivery system which s finding a place in dermatology.